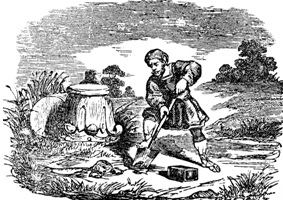 The last parable of Matthew 24-25 illustrates another truth concerning the kingdom of Heaven (not the Church) and is connected with the parable of the ten virgins and the literal coming of Christ. After warning people in the kingdom of Heaven at His return to Earth to “watch” for they would not know the hour of His return, Christ gives this parable illustrating diligence in view of the hour of His coming. In other words, He explains the necessity of watching and being ready for the day of His appearing, at which time He is to judge His servants as to their faithfulness during His absence from the Earth.

Just as the man in this story went into a far country and trusted his servants with his goods until he returned, so the Lord taught that He was going to Heaven for a period and then return to test His servants as to their faithfulness while He was away. Just as this man returned and judged his servants as to their faithfulness, so the Lord will come again at an unexpected time to judge His servants. The ones that prove faithful will enter into greater responsibilities, but the ones who fail will be cast into Hell fire. This is the same judgment as the judgment of the nations.

The judgment of the nations ends the Age of Grace and begins the Millennium. This description of judgment at the end of this age was the last part of the answer to the third question of the disciples “and of the end of the age?” This description of judgment tells us what Christ will do when He comes to Earth to set up His kingdom. This judgment will end man’s sixth probationary period and will end man’s sinful rule on the Earth. Jesus Christ in person, along with the resurrected saints of all ages, will reign on Earth for a thousand years to put all enemies under His feet and re-establish the universal kingdom of God. When the kingdom of God is fully established Christ will reign forever. This judgment will determine who is worthy of entrance into the kingdom of Heaven and who will be executed and cut off from entrance into the kingdom. Daniel 12:12 will then be fullfilled, “Blessed is he that waiteth, and cometh to the thousand three hundred and five and thirty days”, which is the actual day of the proclamation of the kingdom. During this time the nations will be gathered and judged, the Jews will be regathered and settled in the land of promise, and all necessary preliminary arrangements for the kingdom will be made.

Thus, Jesus answers the three questions asked Him by the disciples concerning the destruction of Jerusalem in 70 A.D., concerning signs of His Second Advent, and concerning what will take place when He comes to the Earth at the end of this age. The prophecy of Mat. 24-25 is the greatest one in the New Testament outside the book of Revelation.